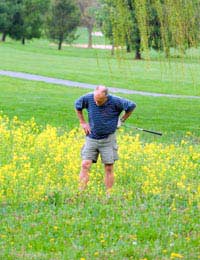 Let’s face it, we’ve all come across a purple-faced fellow member hacking away at the deep rough, cursing their luck and swinging their club in a rather unhealthy manner. Then there are the sprays of sand and ungentlemanly language emanating from a playing partner out of sight in a greenside bunker. Observers of this behaviour, of course, find it very difficult to suppress the laughter, not least because there is a feeling of “there but for the grace of god”. Yes, delighting in the misfortune of others, especially during matchplay may be officially frowned upon, but who really hasn’t done it from time to time? Go on, be honest and admit it.

If, on the other hand, you are one of those players who all too often ends up losing their temper when shots don’t shape up the way you intended, then it’s time to call time on this kind of behaviour. And not simply because it will make you look something of an idiot in front of partners and other players on the course; rather it is only making matters worse.

The best players are those who have the ability to keep their emotions in check, either after a bad shot or when the outcome of a particular situation is likely to swing the match one way or the other.

Remember that once you let anger or panic sweep through your mind, you are going to make wrong decisions. That may simply be the choice of club; more likely it will be ill-advised haste in making the shot and poor technique. By definition, the wrong decision is going to result in a poor shot, and consequently more frustration.

Remaining calm in part comes with experience. Once you have tackled deep rough and course obstacles a number of times, you will be better prepared technically to rise to the challenge. Be sure to supplement this challenge with regular practice sessions that will hone your skills when the going gets tough, or rough. More simply, get a sense of perspective. Everyone wants to play as well as they can, but don’t let your absorption in the game get the better of you. Yes, you’re in a tricky situation but it’s not the end of the world. The earth, believe it or not, will keep spinning whether or not you manage to avoid a double bogey, so relax and accept that you can only try to do your best.

Still feeling uptight? Well, think about how all that tension is affecting you ability to interact with your club. Whether you’re holding a wood, iron or wedge, the success or failure of an individual shot rests on your ability to be as one with the club, the journey from backswing to follow through being a smooth one in order to achieve optimum contact between club face and ball.

Once those shoulders become hunched and the jaw tightens, your swing is in grave danger. Add a healthy dollop of anger to the equation, so that the backswing is swift and violent, and the inevitability of a badly executed shot is there for any observer to see.

Reacting badly under pressure won’t do much for either your self-esteem or how you are viewed by other players. No-one likes playing a round with a shouter; it becomes positively tiresome, to the extent that finding a regular partner becomes problematic. So think positive, not negative, and stay calm. You will not only be admired for your steely nerve but more importantly you will achieve a much greater percentage of successful shot-making and, therefore, much more success on the course.