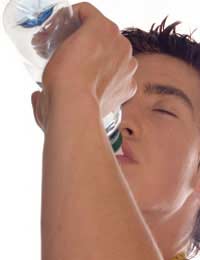 The physical challenge of 18 holes means that, contrary to popular belief, this is not a sport for old majors who like nothing better than a few snifters before heading off down the course.

You only have to look at the lean, mean fighting machines that battle it out for the major championships to realise that reaching a high standard requires good physical preparation along with meticulous attention to the game’s finer technical details. In short, the great players are as familiar with the best uses of a sandwich as a sand wedge.

No one is suggesting a programme of intense physical preparation and strict diet sheets – simply a little commonsense. Better care of your body will have the knock-on effect of improving all-round health, so even though you may never take the applause on the 18th green after sinking a putt to win the Open, you’ll still be a winner.

Think about the execution of shots, the power and control needed in both the upper- and lower-body in order to hit a sweet shot. If your body is receiving the right fuel, it is more likely to perform the way you want. Then there is the small matter of negotiating your way around the course, either carrying your bag or pulling a trolley – that requires good energy levels, too.

In terms of what you eat, look at how well your food is preparing you for playing golf. Is there a good balance of protein and carbohydrate in every meal, and are you ensuring a good level of hydration throughout the day? Believe it or not, instilling some nutritional discipline into your life may result in a greater improvement in your match play than several hours practising your tee shots.

Carbohydrates provide energy, and come in two broad varieties: complex and simple. The former are found in the shape of familiar culinary staples such as pasta, potatoes, rice and nuts; the latter in the form, for example, of chocolate bars, cakes and sugary drinks.

Proteins are essential for building and repairing muscle tissue, and are commonly delivered in the form of meat, fish and dairy products. As a simple guide, meals should contain a balance of carbohydrate and protein, the old meat and two veg formula, if you like.

All of us are, no doubt, aware of warnings about cutting down the amount of fat in our diets. So restrict your intake of fattier meats such as lamb and beef in favour of pork and white meat such as chicken and turkey. Meatier fish portions such as fresh tuna and swordfish will provide a welcome contrast to traditional white fish fillets like cod and haddock.

If pasta is your favoured form of carb, look to combine it with healthier sauce options that are tomato-based rather than reaching for the cream.

Most dietary advice is simply commonsense – let’s face it we all know when we are eating something we shouldn’t. There isn’t anything wrong with the odd indulgence, but cross the line once too often and you’ll be contributing to poor performance on the course.

When it comes to timetabling your meals, eat balanced meals at regular intervals throughout the day, and go to bed the night before a game well fed to promote a good night’s sleep. If you are having a drink with your evening meal, restrict your intake to a single glass – no-one plays well with a hangover.

Don’t forget to pack a snack and a bottle of water to ensure you keep your energy levels up during the three to four hours it will take to complete 18 holes. You don’t want to be flagging just as the climactic final holes come into view. Bananas are a convenient, natural and easily transportable form of carbohydrate, as are energy bars.

Not only will a good diet help you play better, it will promote better physical health that will allow you to carry on playing long after others have had to give up because they are no longer up to the physical challenge. Not only that, you will be in better shape to avoid injury or recover quicker when minor physical problems arise.

Good nutrition doesn’t preclude the odd glass of something nice on the 19th hole; in fact it will make it more likely you will be toasting success on the course.