Home > Golfing Tips > How to Draw the Golf Ball

How to Draw the Golf Ball 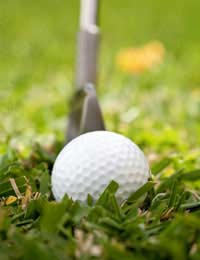 The initial phase of learning to play the game inevitably involves the development of an efficient swing action and making a true contact between club face and ball in order to send it as straight and as far as desired along the length of the fairway. Once this skill has been practised to the extent that the hands and feet are working in harmony to execute a good shot, the student is ready to begin the process of learning how to exert influence over the flight of the ball.

It goes without saying that if every course designer simply produced holes that were straight, then the game would quickly lose a great deal of the challenge that makes it such an enduring pastime for players. Hence the positioning of hazards such as water, fairway and greenside bunkers and trees.

Standing on the tee or fairway, a player very often will not be able to see the green. Perhaps the fairway bends, or doglegs, to the left with the approach to the green and flag obscured by a line of trees. An inexperienced player would be well advised in this situation to take the safe option and aim to position the ball to just beyond the line of trees, leaving it in a position where the flag is visible. From there, it would be a straightforward approach shot.

Yardage Has Been Lost

The downside of this shot-making decision is that yardage has been lost and, therefore, a possible birdie opportunity has been missed because there is still a fair amount of ground to be made up before the putting surface can be reached.The solution is to hit the ball so that it bends around the trees at the right moment and makes a greater distance down the fairway, resulting in an approach shot much nearer the hole.The skill called for here is to draw the ball, hitting it initially on a path to the right before it curves round to the left, avoiding the trees and leaving a more desirable lie.

Positioning of the Hands

As with any stroke, the path of the ball will be dictated by the positioning of the hands and feet, so these should be adjusted in order to send the ball right with the correct amount of spin to curve it round. The clubface should remain square on to the ball but the feet and shoulders should be aligned to the right. This will result in the clubface swinging on an inside to outside path and placing the correct spin of the ball so that it curves rather than travels in a straight line.

Correct execution of the draw will result in a more impressive scorecard. Conversely get it wrong and those trees you were hoping to avoid may be very reluctant to give up your ball without a real fight. Nevertheless, once you are confident in your swing, don't be afraid to take on the draw. It may take time and plenty of practice to master the technique, but the results can be very satisfying.