Cure Your Slicing and Shaking 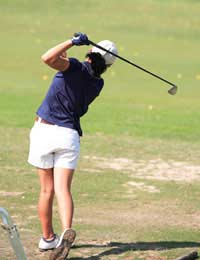 Making incorrect contact with the ball is an event that every golfer has experience of. And don't let any one of them tell you differently. Whether due to poor positioning of the feet or ball, or perhaps your hands are not holding the club correctly, when the ball doesn't fly in the direction you want it to, it can be a frustrating experience.But remember that as stated above, there is a reason why you've executed a bad shot and, as such, these calamities can be avoided in the future by paying particular attention to the small details.

Striking the Ball with too Open a Club Face

By definition, slicing results in the ball deviating from its intended path to the right for a right-hander, to the left for a left-hander. It is caused by striking the ball with too open a club face, thereby putting spin on the ball which influences the direction of flight. This can result from a weak grip, a ball positioned too far forward, poor stance or body alignment. One of these faulty elements or any combination of them may lie at the root of the problem, so the first thing to do is to go back to basics. Look at your hands when holding the club and ensure that they correspond to the correct positioning for whatever grip you have adopted. It may be that you've allowed bad habits to creep in. The same holds true for the other physical components of addressing the ball.

The Ball Flies off at an Acute Angle

If slicing is putting a dampener on your day, then spare a thought for the poor soul suffering from shanking. It sounds alarming, and anyone who has seen it in action will tell you it certainly lives up to its name. A shank involves a player striking the ball with the hosel, the point where the shaft meets the club face. The result can be the ball flying off at an acute angle - all very embarrassing.

The causes of shanking can be traced to any of the problem areas involved in slicing, the end result of this incorrect technique being that the heel of the club is travelling ahead of the toe. Ball positioning, for example, is often a major culprit. Place it too far forward or not in the middle of the club face and the chances are greatly increased that you're going to make contact between ball and hosel.

The Benefit of the Trained Eye

For both slicing or shanking, it is a good idea to ask a playing partner to watch how you are hitting the ball because they may be able to pick up on faults which are not immediately apparent to you. Failing that, turn to the club pro who will have seen these problems many times before. However experienced you feel you are, you're never too experienced not to feel the benefit of the trained eye - lessons are not just for rookies.

And remember that you're not alone. Perfecting technique is never a walk in the park, and once perfected it still needs to be applied every time you play, on every shot.