Home > Case Studies > My Husband Introduced Me to Golf: A Case Study

My Husband Introduced Me to Golf: A Case Study 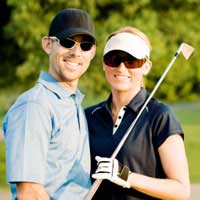 Tired of being a golfing widow, Sandra Collins took the view that if you can’t beat them, join them. The 32-year-old part-time secretary from Watford expected a lukewarm reception from her husband when she announced her sudden interest in taking up the sport, but was pleasantly surprised to find he was genuinely excited by the prospect of having his wife as a golfing partner.

“I had a pretty full life before golf,” said Sandra, who lists scuba diving, cooking and origami in a diverse list of hobbies. “My husband played golf and I had my own hobbies, but because we had different interests we didn't spend a lot of time together. I grew tired of being left to my own devices every single weekend while my husband went off to play in some competition or other.

“To be honest, I was half-joking when I told my husband I wanted to learn how to play golf. I expected him to dismiss the idea out of hand in order to protect his sacred weekends spent with his mates at the golf club. But he was delighted and had me booked up to take lessons before the end of the day. I suppose, in a way, he called my bluff.”

“It is a very technical sport and, at first, I considered it a huge success if I made any contact with the ball at all. Progress was rather slow and I might well have packed it in had it not been for my husband’s enthusiasm. He told me to stick at it and convinced me that everything would click into place eventually. Of course, I wasn’t too convinced, but it turns out he was right.

“Once I was able to hit the ball more often than I missed it, I started to get a lot more enjoyment out of golf. The first lessons I had were group lessons, with one club professional teaching about a dozen beginners. Later on, I got some one-to-one tuition and this helped me to make far more rapid progress.

“I must say, my husband was extremely patient with me. He plays to a high standard – his handicap has been in single figures for the last six years – and when I started out he would give up his weekends at the nearby golf club to take me round a nine-hole municipal course 10 miles away. At that stage, I wasn’t good enough to play at the golf club and the much shorter holes at the nine-hole course meant I could reach the green before getting into double figures!”

Game Within a Game

“They say that putting is a game within a game and there must be a certain amount of truth in that because I took to it straight away. I just seemed to have a bit of a knack for it. In fact, I reckon my putting is better than my husband’s – even if I do say so myself!

“There was a time when I really did not understand why my husband spent so much time at the golf club, but now I spend more time there than he does. I’ve joined the club, play in medal competitions and have a handicap. My job’s part-time, so I can get out on the course more often than my husband does – although we do play together at weekends. I love the handicap system in golf, because it means we can compete with one another. I get a shot at every hole and play off the women’s tees and, that way, will beat my husband as often as he beats me. The loser has to do the household chores the following week!

"It’s a fantastic sport and I’ve made a whole group of new friends by playing golf. I’ve become just as addicted to watching golf on television and this year we’re going up to Scotland to watch the Open Championship at Turnberry.”

My Budget Golfing Tour of Scotland: A Case Study

The Yips Destroyed My Golfing Handicap: A Case Study
Share Your Story, Join the Discussion or Seek Advice..
great story! sounds like golf has made for a great marriage!
pkdonlon - 5-Jun-11 @ 4:20 AM
I started taking golf lessons so I could play and be with my husband more. He was supportive at first and then he just got picky and mean. He would almost make fun of me when I played.I don't like playing with him. It was so much fun at first but then he just ruined it. I have a bad feeling about golf now and it makes me mad because I was really doing very well with my lessons. I want to get the feeling back, but I don't know how.
Want to golf again - 1-Apr-11 @ 2:14 PM
Title:
(never shown)
Firstname:
(never shown)
Surname:
(never shown)
Email:
(never shown)
Nickname:
(shown)
Comment:
Validate: