The Yips Destroyed My Golfing Handicap: A Case Study 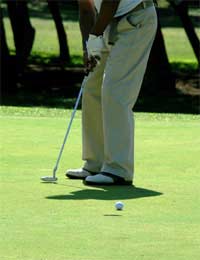 Some of the best golfers to ever swing a club, including major winners Tom Watson and Bernhard Langer, have suffered from the dreaded yips. The inability to make a smooth stroke while standing over a short putt has driven many amateur golfers round the bend. Engineer Sean McKendrick came close to turning his back on the sport for good when the yips wrecked his confidence and caused his handicap to climb well into double figures.

“I started playing the game as a boy and had been golfing happily for almost 25 years when the yips struck,” recalled Sean, a 39-year-old from Aberdeen. “My handicap was down to five and I was competing in amateur competitions in Spain and Portugal as well as all over the UK.

“My short game – chipping and putting – had always been strong. When I had an off day, it was usually my driving that was to blame. Then I started to miss short putts. My chipping and long putting was fine, but holing out became a real nightmare.”

Not a Laughing Matter

“I can’t put my finger on the exact moment it happened. It seemed to sneak up on me and before I knew it I had the yips. At first, my mates thought it was hilarious and looking back now I can just about see the funny side. It wasn’t funny at the time though, and I got so down about it that even my mates stopped laughing. In a way that was worse, because every time I missed a short putt there was just an awkward silence.

“I’d turned into this sad character unable to hole a putt between two and six feet. No-one dared mention the yips, never mind discuss it, because I was, to say the least, a bit touchy about the subject.

“The longer I had the yips, the worse it got. It seemed as though every short putt I left myself had more pressure on it that the last one. I got nervous, had sweaty palms and could feel my heart beating in my chest. It didn’t matter whether I was playing in a competition, a medal or just for fun – short putts started to scare the life out of me.”

“Soon I gave up playing foursomes altogether, because I felt it wasn’t fair on my partner to be lumbered with me. The yips started to affect the rest of my game and my handicap climbed higher and higher. I know a lot of amateurs would be happy with a handicap of 12 or 13, but for someone who had played the game so long and worked hard to get his handicap down to five, it was devastating.”

“I loved golf so much, and it was more than the playing of the sport, it was the friendships and social life too. But the yips wrecked all that. I practised all the time, bought about four different putters and used about every grip in the book, but nothing worked. Eventually, I felt as though I had no option but to give up golf for good.”

“It was no longer a pleasure for me, worse than that it was extremely unpleasant. I work hard and need to enjoy my free time. But when I spoke to my friends at the golf club and told them I was ready to pack it in and sell my clubs, they really rallied round. I suppose that was my plea for help and it didn’t go unanswered.”

All in the Mind

“I was pointed in the direction of a psychiatrist who was a member of the golf club and he was absolutely fantastic. He explained how my self-inflicted mental anguish escalated with every putt I missed and how my fear of missing a putt triggered physical responses – increased blood pressure, shallow breathing and tightened muscles. That, in turn, made it more likely that I would miss.

“The psychiatrist told me the key was to focus on something other than the putt itself, and he suggested I turn my attention to my breathing pattern. I did this, breathing in as I took the putter back and breathing out in one long, smooth, even breath as the putter moved forwards towards the ball. This relaxes the muscles, apparently, and, for me at least, it worked.

“My handicap is now back down in single figures and, more importantly, I am enjoying golf again. I’ve got my confidence back but I don’t take the game for granted the way I once did and I never laugh if someone misses a short putt.”

My Budget Golfing Tour of Scotland: A Case Study