Home > On the Golf Course > The Challenge of Matchplay

The Challenge of Matchplay 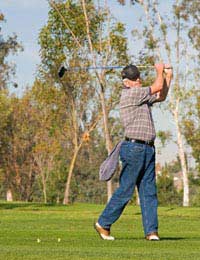 Testing your ability against a tough course is one thing, it’s a whole different ball game when the opponent is flesh and blood and ready to look you in the eye to see whether you have the nerve to rise to the challenge.

But let’s get the ground rules out of the way first. Matchplay differs from strokeplay in that while the latter is about the total number of shots played over the course of 18 holes, the former is played on a hole by hole basis, each player competing to take the least number of shots from tee to hole and thereby win. The match is decided when one player has a lead in terms of holes won that is greater than the number of holes left to play ie over 18 holes, most simply a lead of 10-0 – although heaven forbid, you should ever suffer such an indignity!

Accuracy of the Tee Shot

As a result, each hole becomes a mini battle in itself that begins when the first player places his ball on the tee. So many holes are decided by the accuracy of the tee shot, not simply because a good one will make the second shot so much easier but because it places psychological pressure on the player playing second. Conversely, if the first shot from the tee is a bad one, then the pressure lifting from the shoulders of the second player will be almost visible. Of course, you don’t want to be too relaxed if you find yourself in that position, but nevertheless you are less likely to be tight when addressing the ball and executing the tee shot if you know your opponent is already in trouble.

When evenly matched players go head to head the psychology of matchplay will prove decisive. The one who holds his nerve, doesn’t panic if he or she loses two holes on the spin, and is able to hole a putt to win a tightly contested hole will be the one that is very likely to emerge triumphant.

Getting off to a good start can also be decisive because once you fall one or two holes behind, chasing the match only adds to the pressure, and that pressure can impinge on technique when tackling particularly tricky situations when you find, for example, the sand or the rough.

You don’t want to give your opponent any encouragement, either, by playing one or two bad holes. If he or she thinks they have you on the rack, then they are only going to attempt to turn the screw in order to finish you psychologically even before the match is mathematically out of your hands.

There is nothing more demoralising than seeing you opponent racking up the holes and running away with the match while you trudge from tee to tee, having accepted the inevitability of defeat. That is the downside of matchplay. However, it doesn’t have to be like that. Have confidence in your technique and your ability to go eyeball to eyeball with your opponent and anything is possible.

Matchplay is all about healthy competition – on no account allow tempers to become frayed, however much the pressure is beginning to tell – and adds an extra dimension to your golfing experience. Yes, the taking part is important, but it’s even more fun if you are the winner.

Is PowerPlay a winning formula?