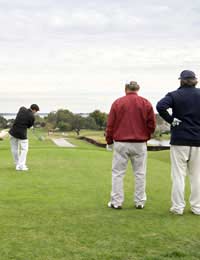 Raise the question of etiquette and many non-golfers will think you are about to reinforce their preconceived idea that the game is a stuffy invention to bolster the old boys’ network and has little or no relevance to modern society. The reality couldn’t be more different. In fact, without the established rules that are designed to guarantee fair play, the game wouldn’t exist.

Don’t think that, should you think about picking up a set of clubs, you will be subject to draconian laws about dress and conduct. Rather, etiquette is based on common sense and good manners – now what could be so outrageous about that?

Let’s begin with that most reasonable of concept in sport – fair play. The vast majority of golfers are more than happy to adhere to the principle because they want to play simply for the love of the game rather than some ingrained and ruthless desire to be a winner, whatever the cost.

Everyone on the course should remember that it is expected they will conduct themselves in a sportsmanlike manner and will be courteous both between strokes and when a partner is addressing the ball. So, for example, desist from making noise on the tee such as coughing or conversation, and for heaven’s sake turn your mobile phone to vibrate. No one is saying you shouldn’t keep in touch with domestic or business affairs, but there is nothing more infuriating than the sound of a partner’s ring tone as you are addressing the ball. It’s worse still if they answer and launch into a dialogue with the caller

Walking Across the Line

The same code applies on the putting green, along with further points such as not walking across the line between an opponent’s ball and the hole. Don’t stride off to the next hole before everyone in the group has holed out, either. So what if you are in a hurry – it’s bad manners.

Safety is another important consideration on the course. Remember that a golf ball travelling at speed is potentially lethal, so under no circumstances play a shot when another person is in line or nearby. Be aware of what is happening around you, or whether, for example, there is a green keeper up ahead who may be out of earshot.

If a person appears unexpectedly after you have made contact with the ball, call out an immediate warning of “fore” to give them time to take evasive action.

Smoothing Over the Sand

Every golfer should also make the job of the green keeper easier by replacing any fairway divots, putting the flag back into the hole on each green, and smoothing over the sand after a bunker shot.

Another reason why there may be movement up ahead is because there is another group of players. They must be given adequate time to hole out but if the problem persists, you are within your rights to ask them whether there is a reason for their slow play. It may be simply the case that your group is of a higher technical standard and is completing holes at a faster rate. In this situation, there is no need for bullying or boastfulness: the slower group should simply wait and allow the one behind to play through, thereby avoiding any raised voices.

All players, whatever their technical standard, should be familiar with the rules of the game as set out by the Royal & Ancient, St Andrews and the United States Golf Association, both to eliminate misunderstandings and allow everyone to enjoy golf to the full.

Is PowerPlay a winning formula?

The Challenge of Matchplay