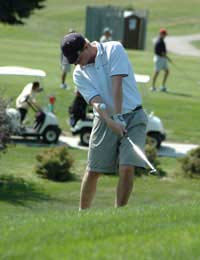 For the inexperienced player, there is no moresatisfying experience than executing a great shot.Golf clubs can be intimidating items to handle, sogetting one to do your bidding and put the ball in thespot where you wanted provides a very satisfyingfeeling.

But as your game develops, an individual shot becomesless about how good it is and more about the influenceit will have on the one that follows. In short, it'snot simply a case of hitting the fairway but hittingthe spot on the fairway that offers the best lie fromwhich to take an approach shot.

In order to play and think, for want of a betterphrase, one step ahead calls for a player to command agreat deal of control over the ball. And exercisingsuch control in many situations requires theapplication of backspin. As the name suggests, thisinvolves causing the back of the ball to move at ahigher rate than the front, restricting the ball'sforward momentum when it lands, whether that be with along iron on the fairway or perhaps with a pitchingwedge on to the green, and preventing it rollingforward and in to a potential troublespot.

The principal aid to the golfer in achieving backspinare the grooves that are incorporated on to the clubface. As the face makes contact on a downward movementwith the ball, the grooves grip it, pulling itbackwards and thereby imparting the spin. For optimumperformance from both the ball and the club, it goeswithout saying that both should be wiped prior totaking the stroke in order to remove any soil or sandand ensure a clean contact. It should be noted herethat it is not just bad housekeeping that can affectclean contact. If, for example, you are faced with ashot in the deep rough, this, too, is going to preventthe clean contact described above.

A dramatic example of the application of backspin andwhere it can utilised to greatest advantage is theflop shot. This technique comes in to its own aroundthe green when a player will find he has little roomin which to maneuver the ball into the idealposition. Executing it incorrectly may land the ballin a bunker or see it sailing off the green and intothe surrounding rough. Definitely not recommended.

Using a pitching wedge, the flop is achieved by takinga high backswing and chopping the club face downviolently against the back of the ball. The result isthat the ball rises high and at an acute angle in tothe air before descending equally dramatically andstopping dead. That's the idea anyway. Of course it may take a whilebefore you can execute the flop shot to any greatstandard but practice and on no account be afraid totake on the shot. Learning to control and utilise spinmeans taking a leap forward in your progress towardsmastering the game.