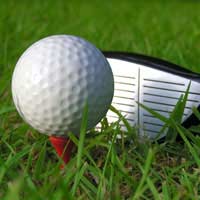 The raised platform known as the tee can be the loneliest place on the golf course. Even if you're playing on one of the less popular days of the week and not as part of a group, it is very often the case that you will have company in the form of a player or players waiting to take their turn.

You are centre stage with no place to hide. Not only do you have to go though the mental and physical preparation necessary to ensure you address the ball properly, but there is also the psychological burden of knowing that should you make a howler, there will be people there making a note of the unfortunate incident.

As Accurately as Possible

They may not be stifling a snigger or shaking their heads disapprovingly, but you just know what they are thinking.As the name suggests, driving the ball is the essence of the long game - making as much yardage as possible as accurately as possible.

But whether hitting off the tee with the one wood, or driver, or utilising a long iron or another wooden club, the muscle power harnessed to produce the shot means that incorrect technique can result in a horror show of a shot. A long putt or chip shot may not turn out the way you wanted but it won't travel that far. But a shot with one of the more meatier clubs can send the ball to a destination from where there is no return i.e. out of bounds.

How to avoid disaster? Most obviously, you must pay attention to the way you were coached to hit the ball. Ensure that your grip, stance and alignment are exactly as you were taught. And whatever you do, don't rush the shot. Step away from the ball and take as many practice swings as you feel are necessary. If you're standing on the tee with a driver in your hands and the aforementioned audience behind you, don't feel intimidated. They'll have to wait as long as it takes for you to prepare yourself for the shot.

Now address the ball. Yes, you want to apply plenty of strength in order to send the ball as far as possible up the fairway, but strength alone will not have the desired effect. However, ally it to your technique and you're likely to succeed.

Think also about your choice of club. The driver packs plenty of punch but harnessing this punch requires a good level of skill. If you're not confident in your ability to use it, why not take a two- or three-wood instead, or one of the longer irons. They may not hit the ball as far as the driver, but they are easier to use and more likely to leave you with a good lie from which to take the next shot. It's better to be in a good position with more distance between you and the green than fishing about in the rough or having to take another shot because your ball has disappeared in to golf's equivalent of the twilight zone.