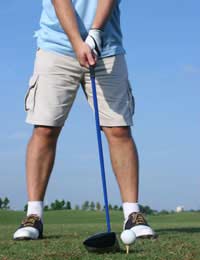 A golf club can be an intimidating implement to grasp for the first time. Of course, depending on how the beginner approaches the task, it can be even more intimidating for those watching on, fearful of life and limb as the club head is propelled this way and that in a vain attempt to make contact with the ball.

In Order to Hit the Ball Cleanly

In a great many cases, it appears the first instinct is to hold the club in the manner of a baseball bat - one hand below the other - an approach adopted by many beginners simply because it is the most natural. However there is a right way and wrong way to do this, and the latter is likely to leave the grass on the tee bearing the scars of heavy gouges.

Remember that in order to hit the ball cleanly, your body must work with the club, producing a rhythmic movement of shoulders and hips that allows for a smooth contact between the club face and the ball.

First things first: look at your hands. When taking a grip with the club head on the floor, the hand that is positioned lower down and at the back of the shaft, i.e. for right handers, this would be the right hand, for left-handers the opposite, is called the trailing hand because it is at the rear of the handle as the club travels towards the ball. The opposite is true for the other hand, naturally enough referred to as the lead hand.

Encourage the Hands to Work Together

The double-fisted grip: Here, all 10 fingers are in contact with the handle, the index finger of the lead hand resting against the little finger of the trailing hand. As mentioned above, rookies tend to favour this although coaches believe it can be detrimental to making progress because it does not encourage the hands to work together as a single unit in tandem with the club.

The Grip Favoured by the Majority of Coaches

The Overlap grip: The reason given above against persevering with the double-fisted grip is the very one put forward for the overlap: namely, it encourages teamwork between lead and trailing hands. For a right-hander, take hold of the club with the left or lead hand, then position the right or trailing hand with the little finger lying on the join between the forefinger and second finger of the lead hand. Again, this may seem alien at first but remember that it is the grip favoured by the majority of coaches and it worked for Harry Vardon, who claimed six British Open titles.

Squeezing so Hard your Knuckles Turn White is not Advised

Strength of grip is also crucial. Holding the club too loosely or squeezing so hard your knuckles turn white are not advised; rather aim somewhere in between these two extremes.

As with all aspects of the game, grip is very much a matter of practice. Mastering it is critical in providing the foundations of building sound technique and preventing those embarrassing moments on the first tee.